Annual General Meeting & Visit to the Churches at Stone & Northfleet

Annual General Meeting & Visit to the Churches at Stone & Northfleet

The Annual General Meeting of the Friends took place at St Mary the Virgin, Stone near Dartford on the afternoon of Saturday 14 May 2022. The meeting was followed by a short talk about the church. The Friends then visited St Botolph, Northfleet, for a talk about the building followed by an excellent tea in the adjacent church hall. 38 members of the Friends attended. The weather was very fine and the afternoon was most enjoyable. 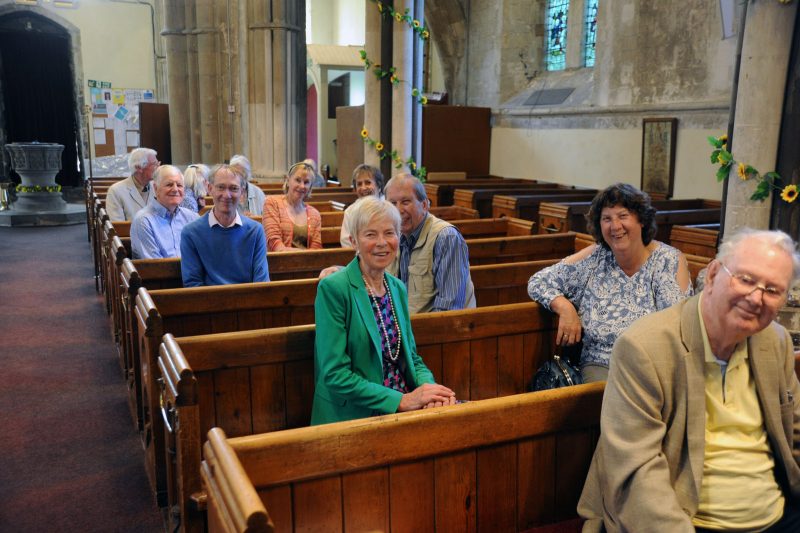 St Mary the Virgin, Stone is an amazing building in such an improbable place. The church was owned in the medieval period by the Bishops of Rochester, who had a manor at Stone. They built or rebuilt it on a grand scale in the 1250s and 1260s and from close stylistic similarities with the eastern arm of the abbey church at Westminster, then being rebuilt for Henry III, the same masons must have been used. The explanation seems to be that Laurence de St Martin, who was bishop in those decades, was a significant figure at Henry III’s court and was able to obtain the services of the Royal masons. 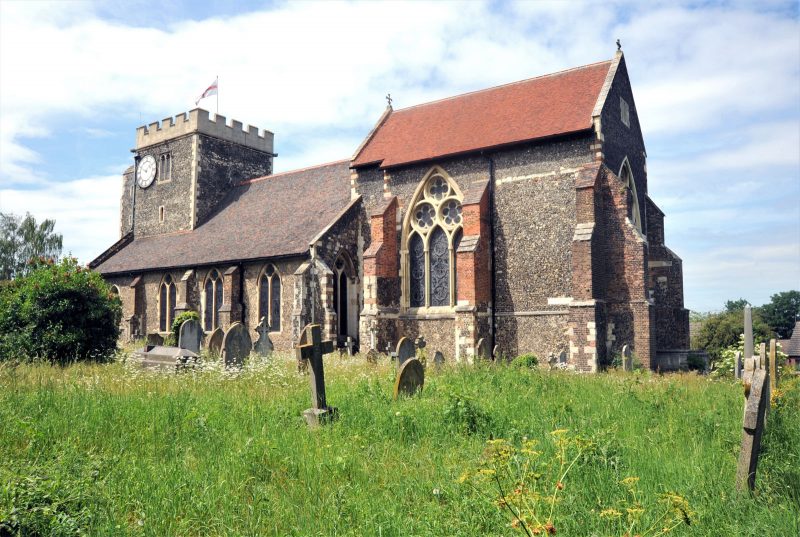 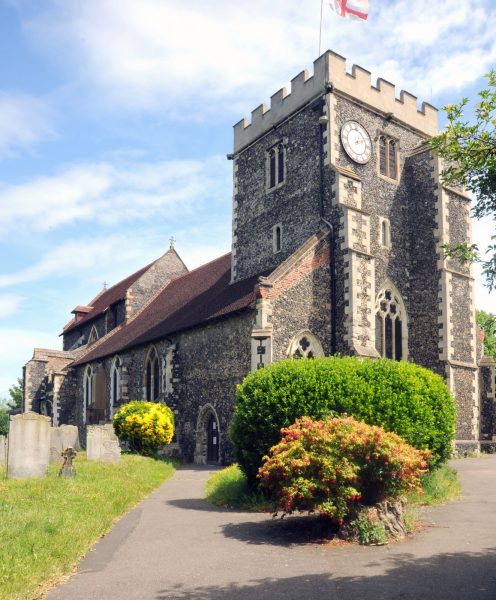 The church consists of a tall, aisled nave with arcades of slim quatrefoil piers with, in the diagonals, dark shafts of Purbeck marble. 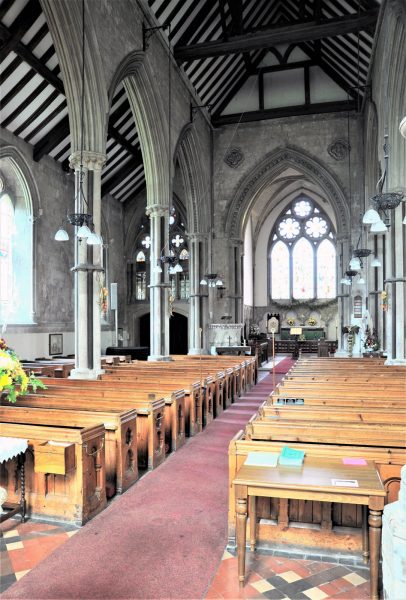 The three-bay chancel is even taller and has gloriously large windows filled with geometrical tracery and that rare thing in a parish church, a stone vault. 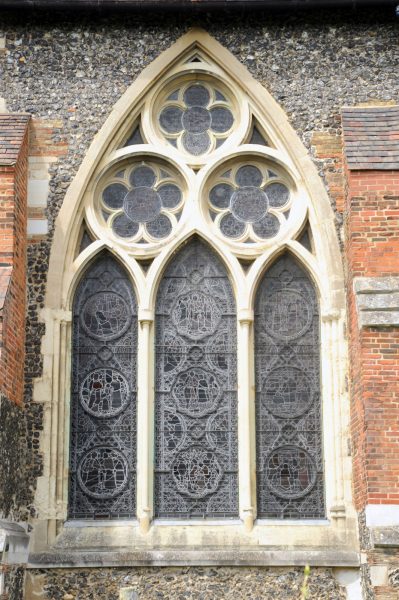 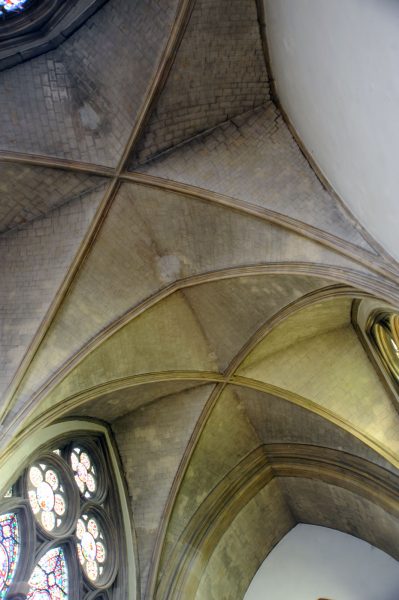 Within, the chancel has beautiful blank arcading round the base of the walls, the spandrels of the arches exquisitely carved. 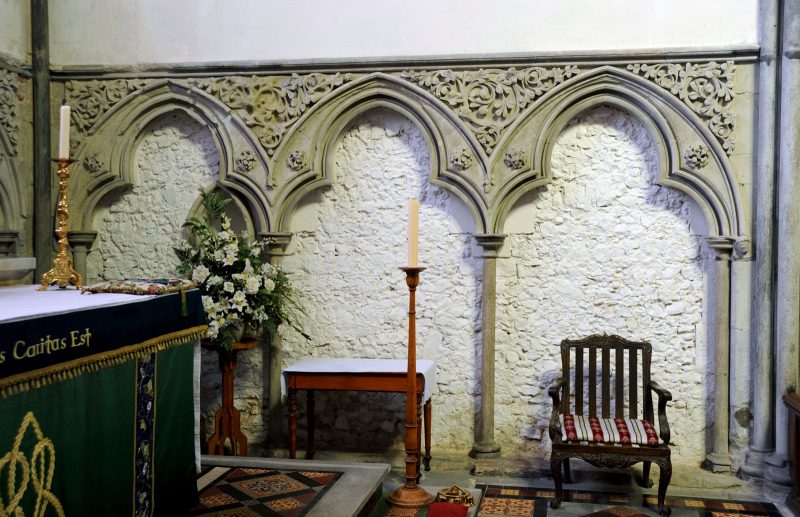 At the west end there is a substantial early 14th century tower embraced by the nave aisles. The church was heavily restored by G E Street in 1859-60. He rebuilt on good evidence the tracery of the chancel windows, which had been largely lost and also put back the vault, which had been taken down in about 1640. He also reroofed the nave. Street’s work is unusually sensitive for that date.

Much of the furniture is by Street and there is good stained glass by Wailes and Heaton, Butler and Bayne.

St Mary, Stone: east windowIn some ways the oddest thing about the church is its site amidst enormous worked-out chalk pits. It was odder still until 50 years ago when a large cement works stood next door. To find here in industrial Thamesside Kent the county’s most distinguished 13th century church (and one of the most distinguished 13th century parish churches in England) is a great surprise.

St Botolph, Northfleet is a large and impressive flint-faced building with aisled nave and a big chancel which at first sight looks to be wholly of the early 14th century. 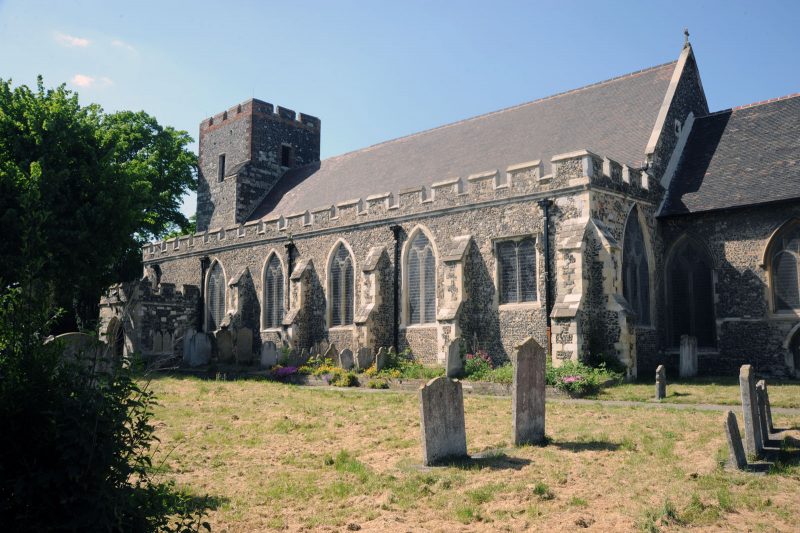 Closer inspection reveals remains of an earlier church: the south-west quoin of the nave is built of tufa and is of long-and-short construction, so must be of Anglo-Saxon date. The tower arch is 12th century and the western bays of the nave south arcade are of about 1200. 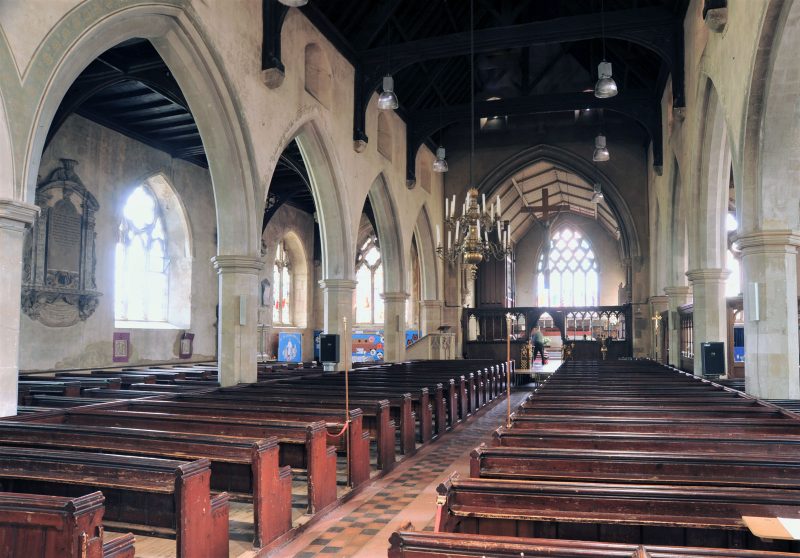 The tower, on the other hand, is much later: the medieval tower collapsed, probably in the 17th century and a new, smaller tower was fitted inside the stumps of the walls of the old one in 1717. The tracery of the chancel and aisle windows is worth examining closely because, although the stonework was renewed in the restorations by Brandon & Ritchie (nave) of 1850-2 and EW Godwin (chancel) of 1862, the windows illustrate rather well the range of patterns popular in Kent in the 1330s and 1340s. 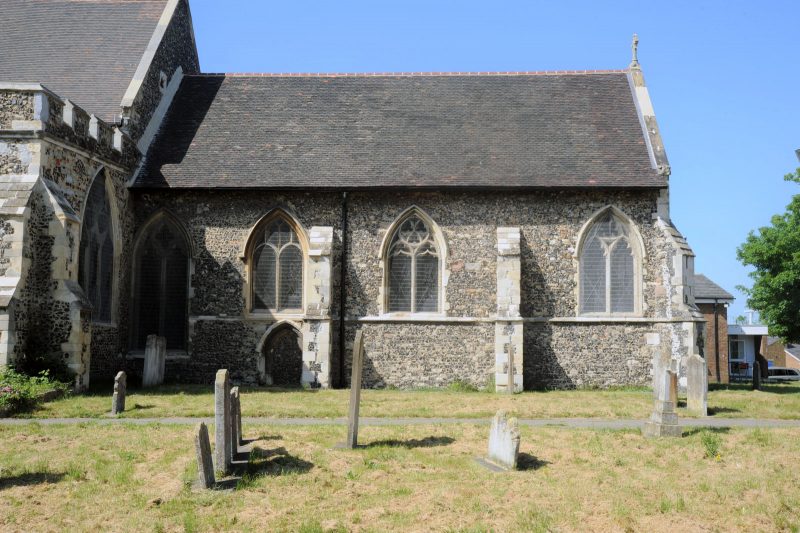 The most important object in the church is the rood screen, which is contemporary with the chancel and may be the oldest surviving rood screen in Kent. 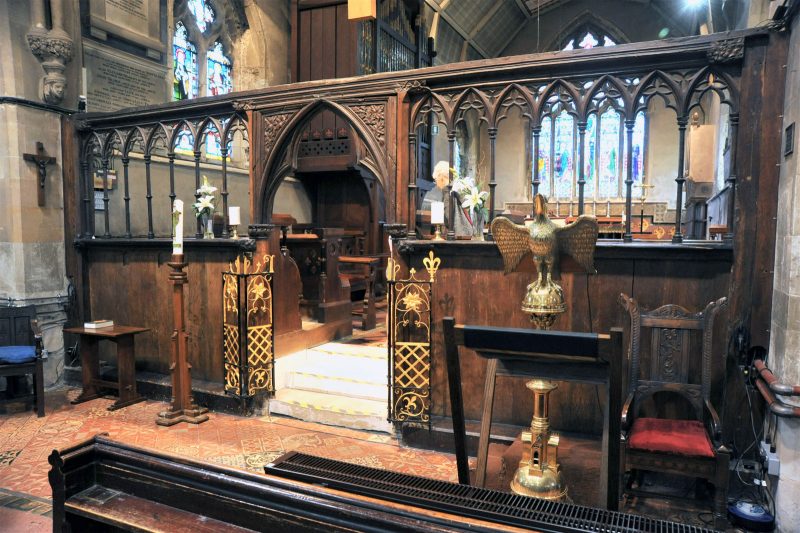 Characteristic of its date, the traceries are supported not by shafts but by small columns with shaft-rings. There is some enjoyable wood-carving on the screen and in the dado two blocked ‘elevation squints’ – holes cut to enable children not tall enough to see above the dado to witness the key moment in the medieval mass, the elevation of the host.

The church has good 19th century glass by Warrington and by Lavers and Barraud, including a magnificent east window of 1862 with singing colours by the latter. 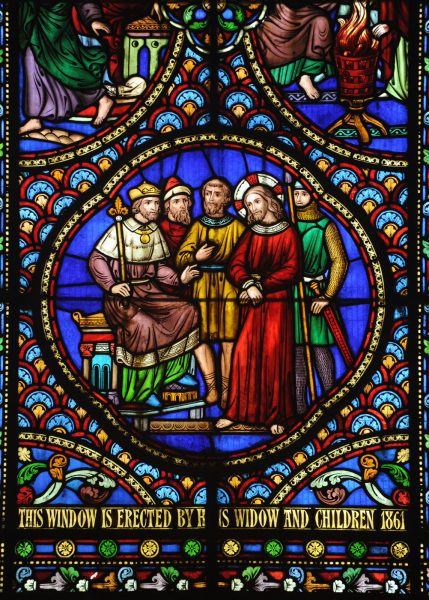 There are also good brasses in the chancel floor and fine 18th century monuments in both aisles, their sculptors including Edward Stanton and Peter Scheemakers. 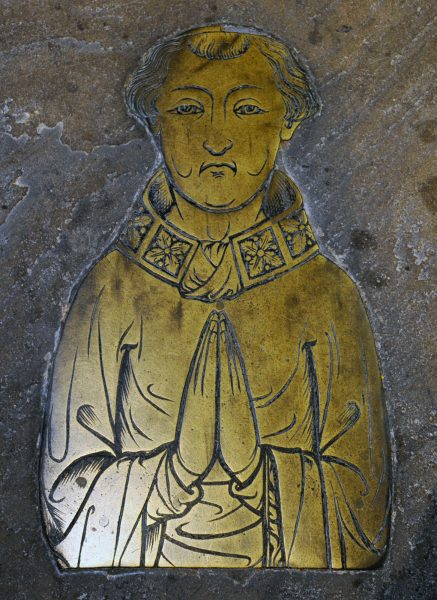 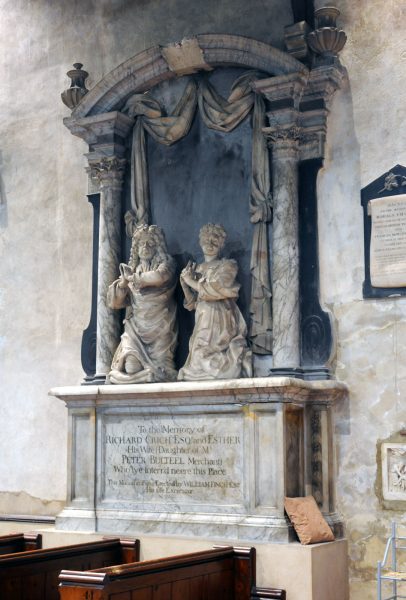 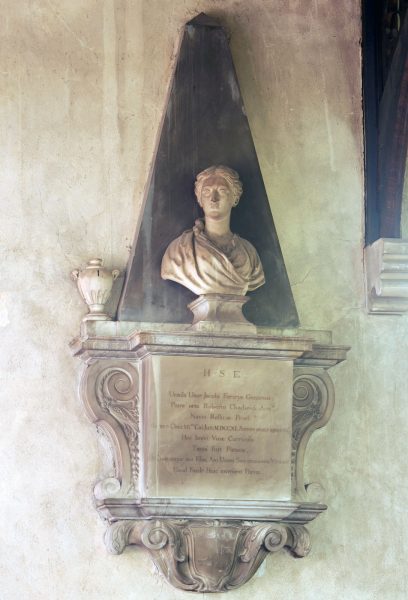